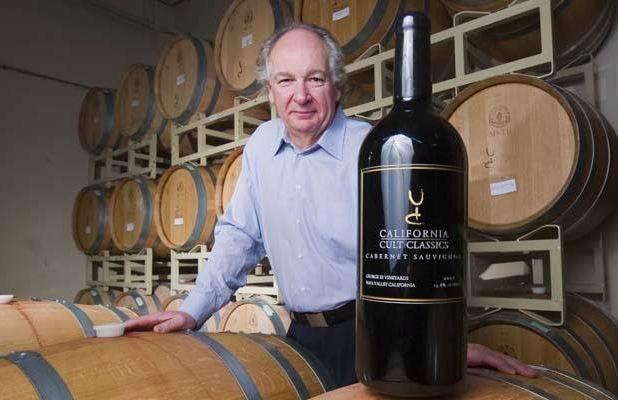 A North Vancouver vintner with an obsession for quality is turning out wines in his upscale U-Vin that are starting to rival Napa Valley’s best and most costly offerings.

The wines of Frank Gigliotti have long had a loyal following among the 400 members of his winemaking enterprise, California Cult Classics, but now they are beginning to garner wider praise.

Located in the commercial district south of Marine Drive, California Cult Classics is sandwiched between a mattress warehouse and a diner. From the outside there is no indication that an operation turning out wines that equal Napa Valley’s fame. It’s not until a visitor passes through the reception, and a members lounge complete with cappuccino machine, and into the barrel room that the scale of the operation begins to dawn. There, 300 barrels, all 200 litres each and made from French or American oak, are stacked in rows reaching up to the ceiling. The adjacent room, separated from the barrel room by heavy plastic curtains that keep heat out, is where the wine is made. It’s filled with giant stainless steel fermenters.

Gigliotti’s pinot noir has been described by famed Napa Valley vineyard owner Andy Beckstoffer as the biggest pinot ever to come off his land. And in a blind tasting last October, sponsored by Vancouver’s American Wine Society, one of Gigliotti’s wines was poured alongside Napa Valley icons like Silver Oak and Chateau Montelena. His wine, a cabernet sauvignon from Napa’s Stagecoach vineyard, came a close second, bested only by a $125 bottle of Caymus Special Selection.

“It was at one of our big tastings last year. We tried to have some of the big names and vintages that were available at that time,” said Doug Russell, cellar master at the Vancouver American Wine Society.

Russell, who is also a member of the California Cult Classic U-Vin, selected the wines and thought it would be interesting to include Gigliotti’s 2006 Stagecoach Vineyard, a renowned Napa vineyard located on the eastern mountain slopes of the valley.

“All of our palates are different, so people look for different things in different wines. It certainly had a freshness to it,” Russell said of the North Vancouver wine. “To a certain extent, I expected it to show well, I would be truthful in saying I didn’t expect it to do that well.”

It’s no accident that Gigliotti is making California wine with a broad appeal from his North Vancouver operation. It’s the outcome of a long wine obsession that began in the 1970s when, as the marketing manager for Columbia Records, he was introduced to fine wine at a dinner with Julio Iglesias, who carried his own mini-wine collection with him when he was on the road.

The wines lack the finesse of Bordeaux, but that’s not a model Gigliotti is attempting to follow. He is unabashed about his love affair with full-bodied California wines.

“Every wine we make is big. We make no apologies for it,” Gigliotti said in an interview. “We pick ultra-ripe, not over-ripe, fruit. But we take it right to the max. When the fruit gets like that is shows so much more complexity. It shows a lot of dark flavours.”

Gigliotti began making wine 24 years ago as an amateur. He founded California Cult Classics in 2005, The operation is everything you would expect a winery to be: fermenters, oak barrels, the sweet smell of grape must floating out of the wine room.

California Cult Classics operates under the B.C. Liquor Distribution Branch’s U-Vin regulations. However, in contrast to most U-Vins, which are small operations where 30-day or 90-day wines are made in glass carboys, Gigliotti has a $1 million investment in a bladder press, 13 temperature-controlled stainless steel fermenters, French and American oak barrels, a bottling machine that injects nitrogen into each bottle to ensure no contact with oxygen, and most importantly, grapes from Napa Valley’s top and most sought-after vineyards. He buys up to 70 tonnes a year of cabernet, chardonnay, merlot, and other varietals. He makes 2,500 cases of wine a year.

Members do not join to save money on alcohol purchases, he said. The average price per bottle is $30 to $35. The smallest amount members can sign up for is three cases — one eighth of a barrel — and they have to put their money down before the grapes arrive.

“I knew when I started, I would have to have professional, winery-grade equipment to make wines in this style. I’d have to recreate a Napa Valley winery in Vancouver if I wanted to make wines of that quality,” he said.

His biggest coupe to date is talking Beckstoffer, whose top vineyards routinely produce wines rated in the 95-100 point range by the likes of Robert Parker Jr. and The Wine Spectator, into signing a grape contract.

For an unknown winemaker from North Vancouver, it was a stretch for Gigliotti to expect to get his hands on some of the world’s best grapes. But, Gigliotti said, when he did get to meet Beckstoffer in 2006, it turned out that the two men had much to talk about: a passion for producing the best and a business model that’s based on family. Beckstoffer has family members in the business. Gigliotti had brought with him his 18-year-old son Paolo, who was the assistant winemaker at that time.

“When I walked in there and told him what he wanted, he kind of laughed at me because there’s a lineup about a mile long of people wanting to get his grapes. It’s not about writing a cheque. It’s not that easy because there’s only so much of the phenomenal grapes that they have down there.”

Beckstoffer agreed to sell him some pinot noir from a vineyard he owns in Carneros, south of Napa. When Gigliotti returned a year later with wine from the vineyard, Beckstoffer was impressed. He then decided to offer Gigliotti some of what Beckstoffer is most famous for and what the North Vancouver winemaker had been making annual pilgrimages to Napa to get: a particular cabernet sauvignon grape called clone 6.

He bought 20 tonnes of clone 6 grapes from Beckstoffer’s George III vineyard, located in Rutherford and planted in the 1930s. It was at one time the source of grapes for Napa’s famous pioneer cabernet, Beaulieu Vineyards Georges de Latour Private Reserve. The clone 6 vines were old and produced tiny berries that looked more like currants than grapes. But they produce wine of unparalleled concentration.

Getting the grapes to Vancouver in pristine condition is a challenge Gigliotti overcomes by having the grapes picked at 3 a.m. in the morning, when the vineyard is cool. He pays $7,000 a tonne for the grapes and about another $1,500 a tonne getting them to the winery versus the average Napa Valley cabernet price of $4,000 a tonne, so these berries get special attention. They are packed in 500-kilogram food-grade tubs, loaded aboard a waiting refrigerated transport trailer and hauled to Vancouver under a constant temperature of 34 degrees Fahrenheit.

Twenty-four hours after being picked they are at the winery, where they are de-stemmed but not crushed and put into fermentation tanks where they soak for one week at 47 degrees Fahrenheit, a temperature too low to allow natural fermentation. That brings out the colours and flavours but avoids extracting harsh tannin, Gigliotti claims. When he does allow the grapes to warm and begin fermenting, they don’t get above 55 degrees Fahrenheit, extremely cool for making wine.

He said his winemaking protocols complement the concentrated flavours of the Napa Valley fruit.

But it’s the quality of the grapes, not the winemaking, that counts in the end, he said.

“I would argue our fruit is about the best you are ever going to get.”