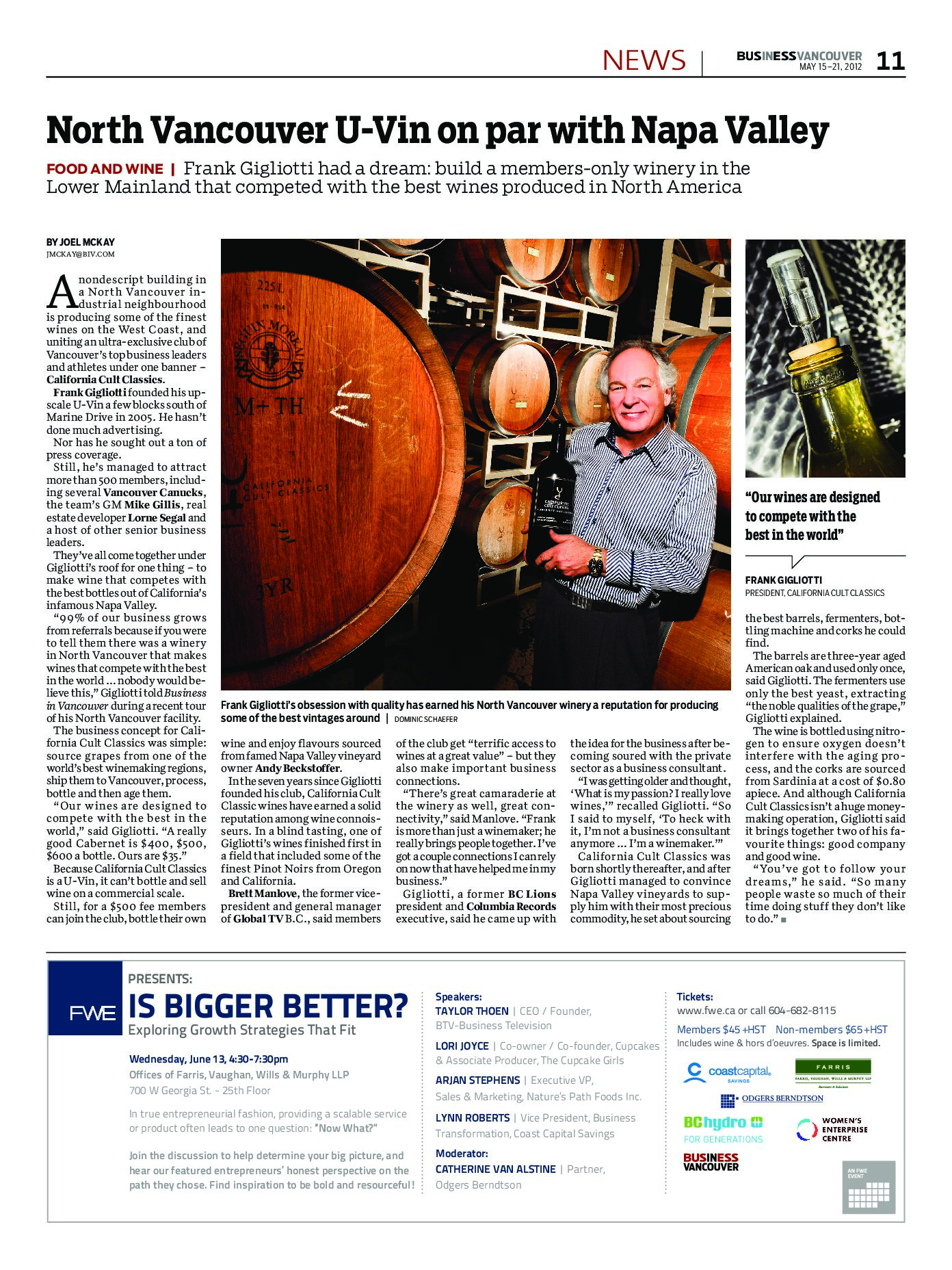 Frank Gigliotti had a dream: build a members-only winery in the Lower Mainland that competed with the best wines produced in North America.

A non-descript building in a North Vancouver industrial neighbourhood is producing some of the finest wines on the West coast, and uniting an ultra-exclusive club of vancouver’s top business leaders and athletes under one banner – California Cult Classics.

Frank Gigliotti founded his up- scale U-vin a few blocks south of marine Drive in 2005. He hasn’t done much advertising.

Nor has he sought out a ton of press coverage.

They’ve all come together under Gigliotti’s roof for one thing – to make wine that competes with the best bottles out of california’s infamous Napa valley.

“99% of our business grows from referrals because if you were to tell them there was a winery in North vancouver that makes wines that compete with the best in the world … nobody would be- lieve this,” Gigliotti told Business in Vancouver during a recent tour of his North vancouver facility.

The business concept for cali- fornia cult classics was simple: source grapes from one of the world’s best winemaking regions, ship them to vancouver, process, bottle and then age them.

because california cult classics is a U-vin, it can’t bottle and sell wine on a commercial scale.

Still, for a $500 fee members can join the club, bottle their own

the best barrels, fermenters, bot- tling machine and corks he could find.

The barrels are three-year aged american oak and used only once, said Gigliotti. The fermenters use only the best yeast, extracting “the noble qualities of the grape,” Gigliotti explained.

The wine is bottled using nitro- gen to ensure oxygen doesn’t interfere with the aging pro- cess, and the corks are sourced from Sardinia at a cost of $0.80 apiece. and although california cult classics isn’t a huge money- making operation, Gigliotti said it brings together two of his fa- vourite things: good company and good wine.

“you’ve got to follow your dreams,” he said. “So many people waste so much of their time doing stuff they don’t like to do.” •

some of the best vintages around | wine and enjoy flavours sourced

in the seven years since Gigliotti founded his club, california cult classic wines have earned a solid reputation among wine connois- seurs. in a blind tasting, one of Gigliotti’s wines finished first in a field that included some of the finest Pinot Noirs from oregon and california.

of the club get “terrific access to wines at a great value” – but they also make important business connections.

“There’s great camaraderie at the winery as well, great con- nectivity,” said manlove. “Frank is more than just a winemaker; he really brings people together. i’ve got a couple connections i can rely on now that have helped me in my business.”

Gigliotti, a former BC Lions president and Columbia Records executive, said he came up with

the idea for the business after be- coming soured with the private sector as a business consultant.

“i was getting older and thought, ‘What is my passion? i really love wines,’” recalled Gigliotti. “So i said to myself, ‘To heck with it, i’m not a business consultant anymore … i’m a winemaker.’”

california cult classics was born shortly thereafter, and after Gigliotti managed to convince Napa valley vineyards to sup- ply him with their most precious commodity, he set about sourcing