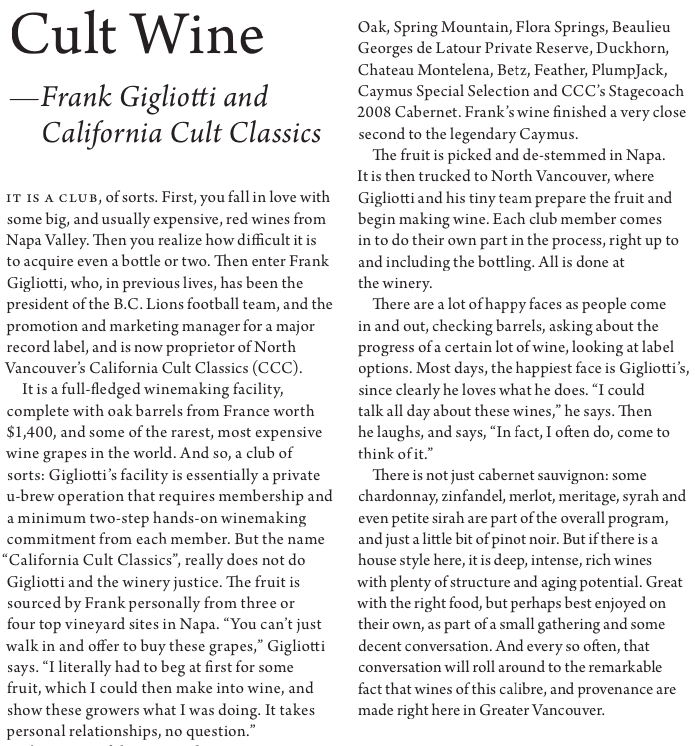 It is a club, of sorts. First, you fall in love with some big, and usually expensive, red wines from Napa Valley. Then you realize how difficult it is to acquire even a bottle or two. Then enter Frank Gigliotti, who, in previous lives, has been the president of the B.C. Lions football team, and the promotion and marketing manager for a major record label, and is now proprietor of North Vancouver’s California Cult Classics (CCC).

It is a full-fledged winemaking facility, complete with oak barrels from France worth $1,400, and some of the rarest, most expensive wine grapes in the world. And so, a club of sorts: Gigliotti’s facility is essentially a private u-brew operation that requires membership and a minimum two-step hands-on winemaking commitment from each member. But the name “California Cult Classics”, really does not do Gigliotti and the winery justice. The fruit is sourced by Frank personally from three or four top vineyard sites in Napa. “You can’t just walk in and offer to buy these grapes,” Gigliotti says. “I literally had to beg at first for some fruit, which I could then make into wine, and show these growers what I was doing. It takes personal relationships, no question.”

The names of the vineyards may not mean anything to those outside a certain small loop of wine cognoscenti, but the grapes in question come from, for example, Andy Beckstoffer’s vineyards, as do CCC’s Cabernet Sauvignon Clone 6. Others are from Dr. Jan Krupp’s Stagecoach Vineyard, from which several Napa heavyweight labels also take grapes. In fact, there has been a carousel of investors and wine agencies wanting Gigliotti to take the step into commercial winemaking. “I’ve fully resisted that, so far,” he says. “We are just having too much fun with California Cult Classics. It’s kind of a little family we have here.”

The fruit is picked and de-stemmed in Napa. It is then trucked to North Vancouver, where Gigliotti and his tiny team prepare the fruit and begin making wine. Each club member comes in to do their own part in the process, right up to and including the bottling. All is done at the winery.

There are a lot of happy faces as people come in and out, checking barrels, asking about the progress of a certain lot of wine, looking at label options. Most days, the happiest face is Gigliotti’s, since clearly he loves what he does. “I could talk all day about these wines,” he says. Then he laughs, and says, “In fact, I often do, come to think of it.”

There is not just cabernet sauvignon: some chardonnay, zinfandel, merlot, meritage, syrah and even petite sirah are part of the overall program, and just a little bit of pinot noir. But if there is a house style here, it is deep, intense, rich wines with plenty of structure and aging potential. Great with the right food, but perhaps best enjoyed on their own, as part of a small gathering and some decent conversation. And every so often, that conversation will roll around to the remarkable fact that wines of this calibre, and provenance are made right here in Greater Vancouver. 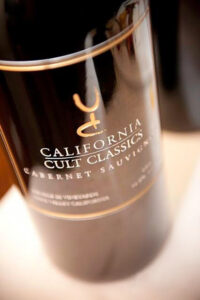